Title: Deja Vu
Post by: Cosmo on April 14, 2017, 09:24:14 PM
One of my pleasures in collecting Archie Comics is finding those I call the Deja Vu issues. It is a fairly usual practice for Archie Comics to use covers from the Golden Age to repeat in the Silver Age. Usually the same gag and cast with some updates in the look. I think the theory was that the average enthusiasm for comic fans was 10 years or less, so there was no need not to recycle a good cover with some updates. Here is Pep 72 from March 1949 and Archie 120 from June 1961.
Title: Re: Deja Vu
Post by: DeCarlo Rules on April 15, 2017, 06:47:41 AM
Yeah, there are a ton of these out there. To say nothing of comparing digest covers with older single issues. There was a short run there of a year or two where the digest covers were actually reprinted, not just redrawn with the same gag, from old issues too.

Then there are the recycled gags where it's not an identical copy down to even the same dialogue, but essentially it's the same joke if you examine it closely, even though the cover layouts of the drawings may not be the same in terms of composition (figures positioned slightly differently, angle or perspective of view, etc.), and wording in balloons may vary somewhat -- it's still the same joke, regardless.

There's even a category where the joke remains the same, but the characters are different from one iteration to another. You might think that would never work, but it's often specific to the nature of the joke, regarding which characters could fit the dialogue.

This is a good thread topic, Cosmo. I guess the only thing is, it requires a lot of time looking through whole runs of covers to find the gags that match each other, unless you happen to just stumble upon one that rings a bell.

The really interesting thing here is that this would be Exhibit A, that you point to when you're attempting to convince people who are utterly disbelieving when you try to tell them that a "love triangle" didn't always exist. It didn't evolve until the 1960s.

Before that, in the 1940s & '50s, things were a lot more straightforward. Betty pursues Archie, and Archie pursues Veronica. Jughead pursues food. If Jughead can't afford to buy a hamburger (or isn't able to acquire one through mooching or trickery), then he'll settle for a slice of pizza (or whatever food's available). If Archie can't afford to date Veronica (or is otherwise blocked from doing so), then he'll settle for Betty (or whatever girl's available).

???  What's up with that image? When I copy the image address and open it in a new tab, the image is displayed in the landscape format. But when I paste the address in a post using [img] brackets, it displays in portrait mode. Weird. 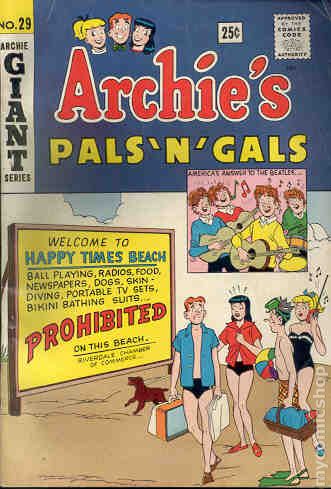 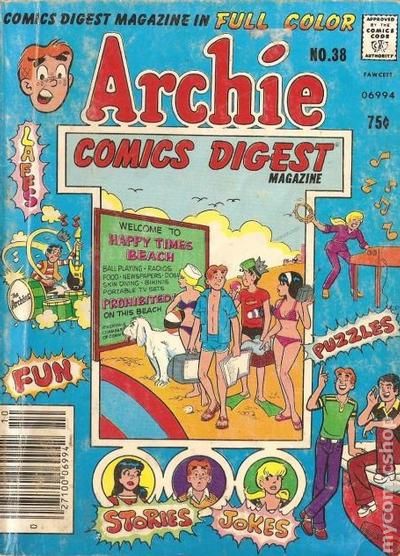 Images from MCS
Title: Re: Deja Vu
Post by: DeCarlo Rules on June 05, 2017, 03:10:33 AM
If you ever checked out the WILBUR reprint section in ARCHIE DOUBLE DIGEST in the past, or in the last couple of issues of WORLD OF ARCHIE DOUBLE DIGEST, then you'll probably remember this image, which the digests use as a "title page" for the Wilbur stories section. 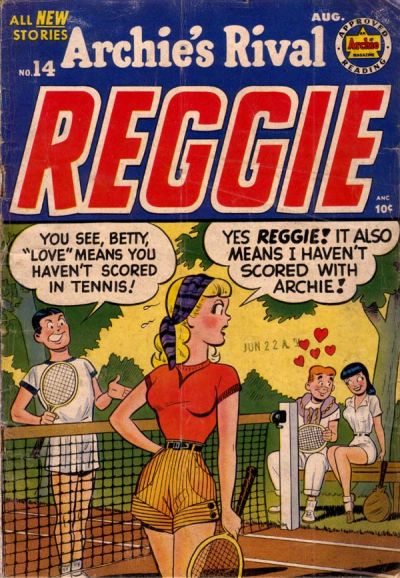 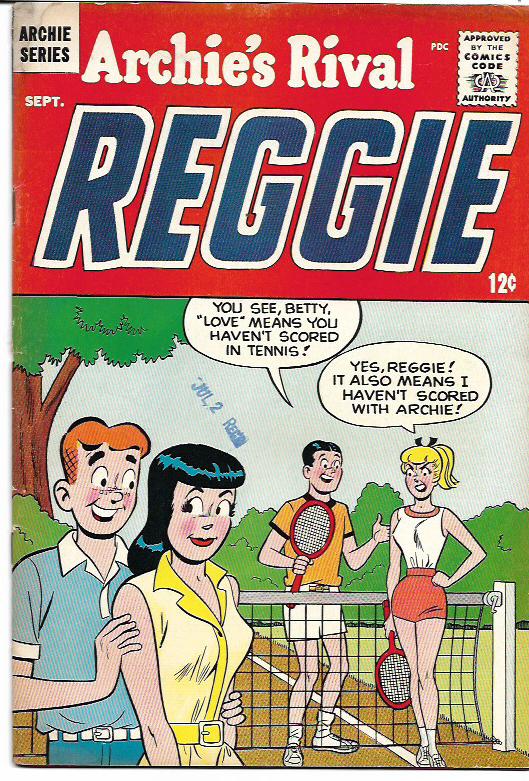 THE SAME:
- the joke's identical; dialogue is word-for-word
- Reggie's pose is identical
- Betty's pose is almost identical (one arm with elbow bent, hand on hip; the other holding her tennis racket) - the two are mirror images except for the direction in which Betty is looking

DIFFERENT:
- On #14, Betty is foreground central and the largest figure
- On #15, Archie & Veronica are the largest figures, foreground left
- On #14, Archie & Veronica are the smallest figures, but perspective lines and the direction of Betty's line of sight both lead the viewer's eye
- Betty has gone from being LEFT-handed on #14 to RIGHT-handed on #15!
Title: Re: Deja Vu
Post by: steveinthecity on June 07, 2017, 07:20:44 PM

I think by then the CCA discouraged showing any left handed characters.

Then again, it may be a presumption for me to assume Betty's left-handed on the cover of #14.

On the other hand (er... so to speak), it's frequently the case where you'll find that artists have concentrated merely on the composition of the drawing, without stopping to consider such details as whether a character would be left- or right- handed, since it's not important to the joke.

One more difference in the two covers which I forgot to note earlier:

- on #14's cover, Archie and Veronica are sitting on the bench in their tennis togs, Archie with racket in hand, awaiting their turn on the court, suggesting a competition -- is it Reggie & Archie vs. B&V, or Archie & Betty vs. Reggie & Veronica? (the latter suggestion tends to make the joke more interesting).

- on #15's cover, there's no indication that Archie & Veronica are involved in playing tennis, they might just be walking by the court for all we can tell.
Text only | Text with Images