Jughead's quirks and characteristics work best when contrasted with the other characters circling him in the Archie universe imo. His long recognized gluttony can be bested by both Kevin and Toni Topaz.  His cleverness and keen observation of others now fails in his battles of wit with Trula outsmarting him are two examples.

Common themes like his dread and avoidance of an encounter with Ethel(& other teenage girls) has disappeared as has his rivalry with Veronica for both Archie's attention and mistrust of Veronica's intentions have fallen by the wayside.  His occasional snark or indifference towards the general population is long gone, replaced by a perpetual pleasant disposition.  When was the last time others were annoyed or angry with his sloth or laissez faire approach to life?  I think the character has simply changed, evolving into a kinder, gentler Jughead which I don't believe he was ever meant to be, at least on the surface.

Also a thought on the anachronism of his hat/beanie, but I don't think it matters. I imagine anyone of any age discovering Jughead for the first time looks past that after seeing just a few panels on a page. The manner in which he's been variously portrayed in the last decade in LWA, in Time Police, Sharknado, or horror-type titles have helped distance him from his early and more identifiable persona for most I'd believe.
#2

Quote from: DeCarlo Rules on April 22, 2022, 01:18:05 PMStill, from 1989-1996, Jughead was popular enough to appear in four ongoing comics (1 floppy comic, 3 digests) named after him (plus a number of admittedly short-lived spinoffs around the same time). Even if the digests are mainly reprints. Not even B&V could outdo that.

A lot of people think that the best of Jughead didn't even happen until 1997-2012, when Craig Boldman and Rex Lindsey became the main (if not exclusive) creative team on JUGHEAD, resulting in dozens of now-classic stories. Boldman redefined Jughead as not just lazy and a voracious eater, but a quirky oddball given to various temporary obsessions that came and went. He was sometimes impulsive, sometimes set in his ways; he tended to think outside the box, didn't care what people thought about him, but invariably had his own blind spots.

I'd say from 1989-1996 Jughead's popularity was coasting on 40+ years of past glory. My thinking is this period was the unraveling of Jughead as so many of us knew the character. The attempts to modernize an otherwise timeless character(to that point) with the aforementioned hats, haircuts, odd friends, skateboarding, etc. The Joani/Debbie love triangle also struck me as something "original" Jughead would have never been part of, and these sorts of storylines continued to both dilute and alter the characterization/personality of the Jughead we knew for decades.  No more Doyle or Gladir, either. The changes in writing and editorial direction seemed abrupt following the renumbering imo.

For the 1997-2012 era I'm wondering just who these people are that consider this timeframe the best?  I suspect the majority of those folks would fall into a much younger demo than fans of 40's to 80's Jughead. Maybe those stories are just as fun for some readers, but to me we saw a dilution of Jug's inherent quirkiness, cunning, and "street smarts", not a reinforcement.  I'd say Jughead fell victim(along with the core five) to ACP's efforts of inclusiveness and fairness which led to his being bested by Kevin or Toni(who?) in eating contests for example.

Without rambling on, I'd say Juggie's fall from grace occurred concurrently with the entire line.  Revamps or updates to all the Riverdale residents we knew and loved just went a mite too far.  Language, fashion, interests, and activities for the gang always updated somewhat through the years, but there was too much change.  Changes to Jughead might have affected his character more than others as he was possibly the most iconic of the Archie gang, at least for me.
#3

All About Archie / Re: Nobody here anymore?

March 20, 2022, 12:13:17 PM
I don't find much value in the digests currently, and mostly stick to back issues at this point.  The last new Archie I picked up was B&V Friends Forever Spring Break #1 virgin variant: 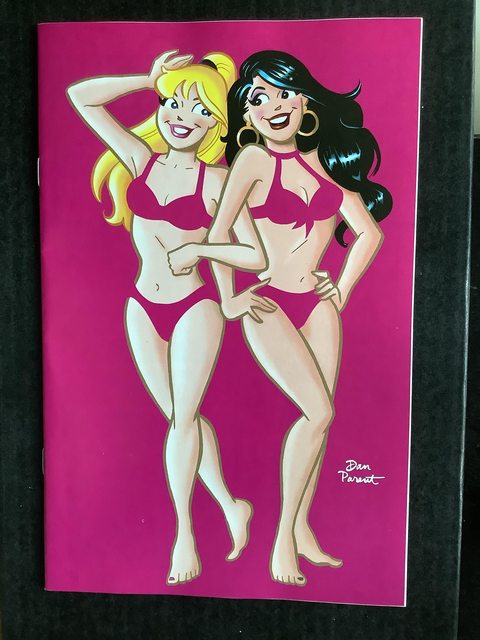 Other Media / Re: The " Carrie " Riverdale Episode

Quote from: ASS-P on September 30, 2018, 08:24:11 AM
I thought I posted about the " Riverdale " episode where they did a production of the musical bases on Stephen King's " Carrie ", but I searched for it and I could not find it

General Discussion / Re: Latest Hauls, what did you buy?

Some nice Dan Parent head shots there. Maybe it's me, but doesn't it seem a little weird that the shirt design allows space for a dozen character head shots, but it's the same six characters, repeated twice? ... Rather than, as would seem to make a lot more sense to me, including Moose, Midge, Chuck, Nancy, Cheryl, and Dilton? I suppose they could have made the main cast's heads a little larger, and the supporting cast's heads a little smaller (and mixed up the pattern) to make the main characters faces stand out a little more.

I was thinking along the same lines except instead of Nancy, Chuck, and Cheryl, using Weatherbee, Grundy, and Pop Tate (or Mr. Lodge).  Then I sort of realized the Hot Topic demographic probably doesn't want to walk around with images of old folks on their shirts.

September 10, 2017, 12:55:49 PM
It's interesting to see these figures, and I also wonder where the figures came from and exactly who was reporting their sales that would combine into the totals presented.  We know the monthly Diamond figures only reflect orders for a given period, so of course that's always been somewhat incomplete.


I'm not sure what my takeaway of all this is, but the snapshot appears to show digital sales have levelled (or declined) despite the increase in ownership of devices people could use to access digital content during the 2011-16 years.  I also suspect the increase in overall dollars by 2016 is more a reflection of higher per unit price than any sort of bump in readership.


Makes good food for thought regardless.

All About Archie / Re: Riverdale Reviewed

August 25, 2017, 08:19:03 PM
Hey Tuxedo Mark, just wanted to let you know I do read your reviews.  I rarely watch the animated stuff, but I do like seeing the screen shots and hearing your comments. Thanks for keeping your review page going all this time.

General Discussion / Re: What are you listening too ?

August 20, 2017, 04:34:44 PM
I'm sure that if I can suss out who random anonymous people are that visit this forum with new usernames that a DNA test must have way more substance and validity to determine someone's background than whatever I'm able to glean from some typed words on a screen.

All About Archie / Re: "Unknown Artists"

July 09, 2017, 05:08:44 PM
This made me recall a digest story that had an obviously phony name credited as the Letterer.  I wish I had made an actual note of it at the time, but forgot.  I do believe it was Fernando's art, but don't recall the story itself.

Feedback/Support / Re: Shoutbox not working for me

Quote from: Tuxedo Mark on June 28, 2017, 02:35:26 PM
For the past few days, when I try posting in the Shoutbox, the little icon spins endlessly, but my message never appears.

Why don't you both put your "Shouts" in this thread?  I'm interested in what either of you have to say.
#11

All About Archie / Re: Betty and Veronica #3

Quote from: Vegan Jughead on June 21, 2017, 07:47:54 AM
I just got around to reading the new issue of Betty and Veronica.  Despite the ridiculously long wait since issue 2, I think this one was worth it and definitely the best issue yet.  It kind of wraps up the story, so who knows if Adam Hughes is slated to do any more B&V?


I thought this one had more humor than the previous 2.  I was a little lukewarm on those.  Hot Dog's interludes were better too.

I was certainly disappointed with the conclusion and the way it was handled.  Seemed like a cheap way to wrap up a storyline and I doubt this was how Hughes and/or the editor(s) planned this story to go.  Shades of the "Farewell" story arc from the previous B & V series.  I'll re-read the three issues in succession later to see if the story flows (reads) better.

As I've already posted, Hughes has stated he is off the book, so I wouldn't expect to see him again at ACP unless he's brought in to do a cover.


Quote from: irishmoxie on June 21, 2017, 09:50:17 AM
After nearly a year long wait, it was eh for me. He was trying to make it like a movie with the fire and all that. I really hope they relaunch the series with a new writer and artist. I would love to see it marketed to females this time.

I think "eh" is apt.  I was expecting more, so I'm obviously going to be a bit bent over the conclusion and bringing in Hughes to begin with as many predicted this pairing of Mr. Hughes with these characters wouldn't work out.

How was this book not marketed towards females?  I must have missed all the beer, fisticuffs, and gratuitous shots of the gal's nether regions that would otherwise market this book to me, a manly man of many manly interests.

I'd go back to chopping logs but I just had my nails buffed at Annabelle's Tips and Toes Salon, so I'll just read some Simon & Kirby romance comics until my Conan Masterworks arrives from Amazon.

General Discussion / Re: Days we look foward to as Archie Fans.

Mr. Hughes has already announced he's off the comic.  I'm not so sure the title even comes back anytime soon.
#13

It just an anagram that followed a one year late reply and an observational post.

All About Archie / Re: The end of sonic the hedgehog comics (unofficially) and how will it play out

June 09, 2017, 01:56:37 PM
When does Archie officially lose the license?  Weeks, months, a year?  Just wonder if there's enough financial motivation to produce more issues if as Goldwater reportedly stated "(they) are trying to get away from Sonic because it's not really Archie"?


Does Sega have another publisher to turn to in the event ACP doesn't renew?
#15