July 10, 2020, 10:52:50 PM
Finally got around to the newish Sabrina series by Kelly Thompson. I really liked it. Anyone else read it or the sequel series Something Wicked?
#2

I'm really intrigued by this. Too bad it doesn't come digitally. Is it similar in tone to B&V or too kiddish? I've read some things from Papercutz. The Barbie series was definitely for kids while I enjoyed Chloe (originally a French comic).
#4

[...] Mixed feelings. There is something I like about it, but it does seem weirdly 30-something angsty, and as a result of that feels somewhat emotionally exhausting to read.

The other thing I noted here is that while on the one hand, the author wants to maintain a certain degree of realism/verisimilitude, on the other hand, she's cast her main character into a role as the heroine of the kind of romantic soap-opera (with a much younger male model pursuing her), which is the exact opposite of a realistic scenario -- it's exactly the romantic fantasy that is being critiqued (via the screenplays of the main character as a writer). It's confusing to me whether the author has some ultimate purpose in these clashing elements, or if it's more of a commercial concession to the perceived audience, sort of a "have your cake and eat it too" thing.

I loved it because of all the Sex and the City spoofs. I kept waiting for the other shoe to drop and it did. The younger male "fantasy" is very popular in Asia particularly in K-dramas known as "noona dramas."


I have that Back Issue #107 but I haven't started it yet because it seems so overwhelming with information. From what I read of it I didn't understand the older non-Archie comic book references but I'll get to finishing it eventually. I really liked that Dan Parent interview in that other comic book store magazine you recommended. I didn't know he was bisexual.
#6

September 26, 2018, 02:37:47 PM
Didn't like Archie Meets Batman #1. The Archie story was terribly drawn. Dan P must've been focusing on Batman which had good art I thought but I wasn't interested in the story.
#7

All About Archie / Re: My thoughts on the upcoming Archie 1941 miniseries taking the main series place

September 26, 2018, 02:34:53 PM
I read it. Too depressing and too obvious by hinting that Archie will be signing up for the military. Decarlo is right. It's nothing like the comedic comics from the 40s.
#8

Debating on whether this is worth a purchase or not.
#10

THE BAD NEWS:  Well... First, let me ask you a question. How many of you happened to read the last couple of issues of B&V Friends Jumbo Comics Digest, and Betty and Veronica Jumbo Comics Digest?  If you didn't read them, then I guess for you there's NO bad news, so forget I mentioned anything.

For everyone who did read those digests, though...

Here are the stories in Betty and Veronica Friends Forever #1 - At the Movies :

I can't say I didn't have my suspicions, and I almost mentioned it when I noticed (after B&VFF #1 had been announced with an "At the Movies" theme) that the stories in the recent digests almost seemed like they could have fit right in with the newly-solicited $2.99 floppy comic. And then, I was wondering... if they can't sell enough copies to make money off a $3.99 classic Archie floppy comic book, then how can they possibly make any money off a comic book which sells for $1 less per copy?

I don't want to put words in irishmoxie's mouth or presume to speak for her, but I feel pretty sure she'd say "Boo!" to this.

Boo! Haha. That's exactly what I said when I read this. Unfortunately I did buy the comic first. But as I haven't been keeping up with digests lately, these new-ish stories should be new to me. So they're kinda like mini versions of those Best of 2016/2017 Digest Annual digital only releases they've been doing.


Couldn't they have included at least one totally new story?

I thought Classic Archie was making a comeback.
#11

Didn't you mention another magazine that had Archie creator or Dan Parent interviews in it? Back Issue?

That would be COMIC BOOK CREATOR Magazine #16, published last year. 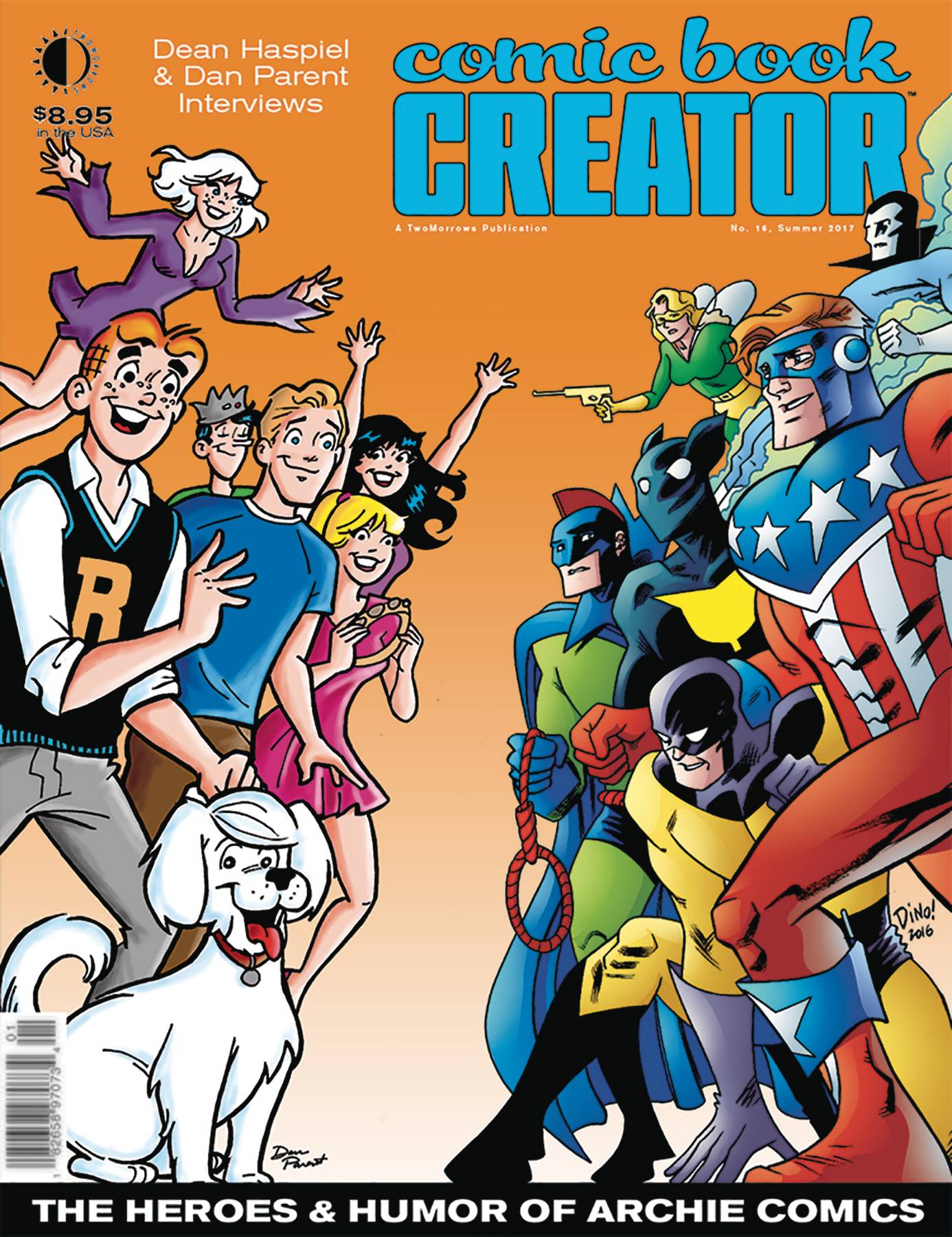 From the very same publisher (TwoMorrows), and available as a digital download right NOW!

One nice thing about the TwoMorrows magazines for digital readers is that they're only $4.95, as opposed to the usual printed magazine which costs $8.95 (but if you buy the print magazine direct from TwoMorrows they throw in a free copy of the digital download, gratis!)  And since BACK ISSUE #107 is still a pre-order (for a September 2018 release), TwoMorrows is offering it at the pre-order price of 15% off the regular $8.95 cover price ($7.61) -- and you still get the FREE digital copy as well, so if you buy the print magazine you get the magazine for only $2.66 more than you'd pay for the digital download by itself.

Thanks. There was this one and I remember a magazine doing a Christmas special with Archie in it within the last 1-2 years or so.
#12 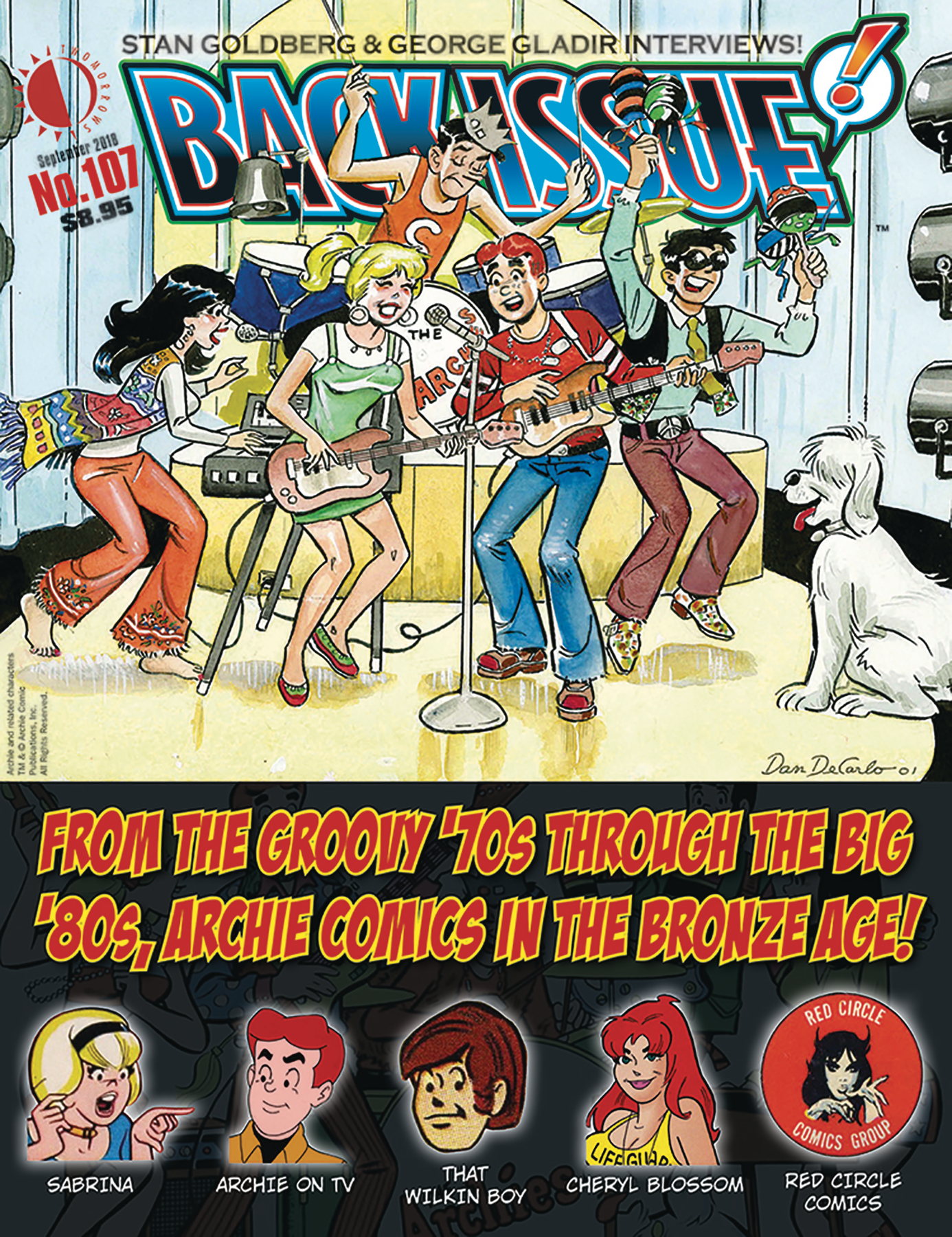 Available to order through your local comic shop (request Diamond Order Code MAY182064) or order direct from the publisher, TwoMorrows, as a print magazine or a digital download:

Yay digital. I think I will order it then.


Didn't you mention another magazine that had Archie creator or Dan Parent interviews in it? Back Issue?
#13

Quote from: gillibean on February 19, 2018, 09:47:44 PM
Sometimes its really funny how they try to force the most random things from the comics into the script. For example "Jingle Jangle" (The song by the Archies) is now the term for a pixie-stick type drug. Pretty hilarious how they forced that one in.

I don't watch every week and I tend to marathon the episodes. My favorite part of the show probably is the Easter Eggs and there's plenty of them. They usually elicit a chuckle from me.
#14

February 17, 2018, 01:31:48 AM
Harvey and Ivy meet Betty and Veronica actually kept my attention more than the Vixens series but both are series I only read if I'm bored.
#15

All About Archie / Re: "The Archies" will end with issue #7